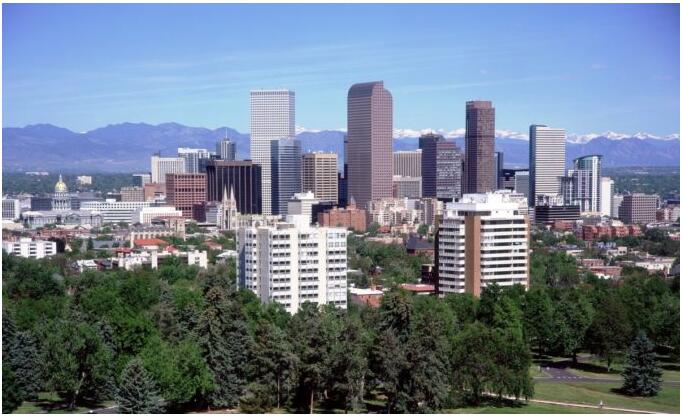 Denver is the capital of the US state Colorado and is located at the eastern foot of the Rocky Mountains. Denver was originally a gold rush town and has a population of about 600,000. Around 2.6 million people live in the conurbation.

Denver is exactly one mile above sea level and is therefore also known as the Mile High City .

The city was founded as a mining town called Denver City during the Pikes Peak Gold Rush in November 1858 .

On the 16th Street Mall , a two-kilometer pedestrian zone between Union Station and Broadway, there are over 300 shops as well as 50 restaurants and street cafes. Denver attractions include the Downtown Aquarium , Elitch Gardens Amusement Park , Denver Botanic Gardens , Colorado History Museum, and Denver Art Museum .

A tour of the US Mint , the state mint, and the shops and restaurants in Larimer Square are popular tourist destinations. There are over 90 breweries, music clubs and restaurants in the historic LoDo district . The trendy Cherry Creek Shopping Center offers a variety of shopping opportunities.

Even sports fans get in Denver lots offered, thanks to professional teams in hockey, basketball, American football, baseball and football. Denver is also a popular starting point for round trips to the South or Northwest of the USA.

With the Mile High Culture Pass , Denver proves that enjoying art and culture doesn’t always have to be expensive. Travelers can expect a wide range of art at affordable prices. With the “ Mile High Culture Pass ”, visitors can visit the seven main cultural attractions of Denver for five consecutive days. This includes admission to the Denver Art Museum, the Denver Museum of Nature & Science, the History Colorado Center, the Clyfford Still Museum, the Denver Botanic Gardens, the Kirkland Museum of Fine and Decorative Art, and the Denver Zoo. There is also a discount on the popular Denver B-Cycle bike-sharing program and, depending on the travel period, the pass holders can enjoy further discount campaigns.

The History of Cowboys and Western Art: A tour of the Anschutz Collection in the American Museum of Western Art in the historic Navarre Building is recommended. The Black American West Museum is also very exciting .

Walks to Art in Denver

The museums in Denver with their unique art treasures are also popular with tourists. In addition to the classic and established collections, there is a wealth of interesting galleries and exhibitions that present exciting contemporary art. Art walks that take place regularly on selected dates lead art-interested visitors to such hotspots in a targeted manner. At the events, the participating galleries stay open longer in the evenings so that you can stroll from one exhibition location to the next in peace and quiet and deal with the latest developments in art in a relaxed atmosphere.

Denver’s colorful creative scene can be experienced in numerous city districts on the first Friday of each month . Galleries, studios and other cultural institutions open their doors until late in the evening for a night of consciousness-expanding full of art, culinary delights and communication. Thousands of visitors flock to the Art District on Santa Fe, Tennyson Street, the Golden Triange or the RiNo Art District, to name just a few areas that are particularly suitable for immersing themselves in the world of art.

Time travel in the museum: Anyone interested in history and art is in good hands in the grandiose History Colorado Center.

On April 28, 2012, the interactive Museum History Colorado Center opens in the heart of Denver. Whether as a ski jumper on the jump table in Steamboat Springs, as a traveling salesman in Bent’s Old Fort or looking for silver in a mine in Silverton – in this adventure museum the visitor becomes part of history. Thanks to numerous interactive elements, videos, photos and sound effects, the museum, which is over 18,000 square meters in size, allows history buffs to take part in the most striking historical events of the US state.

Travelers get a first taste of the area before starting their tour of the west from Denver. One of the interactive highlights is the oversized topographical map by the renowned artist Steven Weitzman, embedded in the ground. Using a “time machine”, visitors can travel along the historic places of Colorado and get to know the US state from a new perspective with the help of entertaining anecdotes.

On the trail of a myth: In the Molly Brown House Museum, over 10,000 historical artifacts allow visitors to immerse themselves in the early 20th century. The striking house in Victorian style was converted into a museum in honor of the well-known Titanic survivor Margaret “Molly” Brown and offers fascinating insights into the lives of extraordinary travelers as well as extensive background documentation on the Titanic and its fateful maiden voyage on 700 square meters which ended on April 15, 1912.

The Molly Brown House is said to be haunted: lightbulbs spin out of their sockets as if by magic, doors open and close by themselves, dark shadows flit through the corridors and you smell fresh cigar smoke.

The Infinite Monkey Theorem company in vibrant Larimer Street is urban and hip . True to the motto “Yes, we canned!”, The company, which has been in existence since 2008, also brings its wine to the market in cans . Whether Merlot, Syrah, Albarino or Black Muscat – Antonio Banderas and Ms. Melanie Griffith are already prominent fans of the range.

And the quality is also impressive. The winery with the distinctive monkey logo received a convincing 89 points in the renowned “Wine Spectator” ranking for its “100th Monkey-Grand Valley” drop from 2010. Tastings can be booked online.

Urban agriculture of the future is already present in Colorado

Fruits and vegetables grown between skyscrapers? Eggs from chickens that live in the middle of the urban jungle? In the US metropolis of Denver, this visionary and futuristic sounding form of agriculture is already practiced today, because the residents can officially become small farmers. A law passed by the city council enables them to obtain a permit that allows them to sell their own products from their private gardens directly to end users. This also applies to food such as jams, honey, teas and certain baked goods that can be made in your own kitchen and stored unrefrigerated. Eggs from chickens and ducks they keep themselves may also be driven out in this way.

In the USA, the capital of the US state Colorado is one of the leading cities in terms of inner-city agriculture. At the Blue Bear Farm in the city center on the grounds of the convention center, fruits, vegetables and herbs are grown and processed in the kitchens on the exhibition grounds. Many restaurants in the city also have their own gardens and farms, and you can also buy products from the immediate vicinity.

The more than 600,000 inhabitants of the city prefer to use fresh products and groceries from the region. The “farm-to-table” principle, i.e. the direct route of products from the field to the consumer’s table, has always been part of everyday healthy life in Denver. This way of life can also be seen at the city’s numerous farmers’ markets, such as the Cherry Creek Fresh Market on Saturday or the South Pearl Street Farmer’s Market on Sunday. Thanks to freshly prepared food and live music, they have become popular destinations for both locals and tourists.

In keeping with the health aspect of the topic, visitors to Denver can also ride a bike from the B-cycle bike-sharing program from farmer’s market to farmer’s market, stopping at private houses on the way to try out what they have to offer.

The Tourist Information Center is available as a point of contact on the central shopping and entertainment mile of California Street in the heart of the city . Denver introduces itself to its visitors on large screens from the outside; the various short films show all facets of the region and offer great suggestions.

In addition to the helpful staff, an extensive range of cards and brochures – also in German – the latest touch screen technology offers amazing possibilities. Tourists send the information from the tablets in the center directly to their cell phones or simply print out the relevant pages.

Those who are still looking for the perfect souvenir are spoiled for choice in the large souvenir shop next door. There is a special focus on local manufacturers and artists who present themselves with sometimes unusual ideas.

Out and about in Denver

Explore an American city without leaving an ecological footprint ? Denver makes it possible: From the airport to Union Station in the city center, you can travel comfortably and environmentally friendly by train in just under half an hour.

Free electric buses run every minute up and down the 16th Street Mall, which is within walking distance of other hip neighborhoods such as Lower Highlands and many of the city’s hotels. And with 300 days of sunshine, visitors and locals like to use Denver’s huge network of cycle paths , which even lead to Cherry Creek Mall via its own trail.

The Maven Hotel opened its doors in April 2017 on the site of the former Windsor Dairy factory in the Lower Downtown District of Denver . In the 172 rooms and suites, modern Western interpretations meet the latest technology and functional minimalism. The design house is also intended as the heart of the lively Dairy Block district, where culinary artists and small boutiques provide plenty of local color.

The Crawford Hotel is a highlight for rail enthusiasts. The newly built boutique hotel in July 2014 with 112 high-quality rooms is part of the lavishly restored historic Union Station in the heart of Denver. One of the largest railway collections in the world is housed in the basement of the building.

Red rocks and beautiful wildflowers such as delphiniums, lupins and gentians characterize the landscape of Roxborough State Park . Here the flat plains slowly transform into the mighty heights of the Rocky Mountains. For this reason, wildflowers bloom here side by side, which usually do not grow in the immediate vicinity. Because of its proximity to Denver, the park is a popular destination to get away from the hustle and bustle of the city and enjoy nature. The Willow Creek Trail is known for its abundance of wildflowers. The main flowering time is from the beginning of May to June.

In this natural paradise near Fort Collins, north of Denver, the view is arguably as pristine as the first European settlers found it. On the vast, pristine prairie, you can see bright wildflowers as well as bald eagles and falcons circling in search of prey. The paved Fossil Creek Trail runs four kilometers through the prairie. On the leisurely stroll, visitors learn interesting facts about the area on information boards. Between June and August, violets, coneflowers and silk flowers bloom here, as well as turmeric and foxglove whiskers.